Buckle Up: Seat Belts Save Lives

Truck drivers make up an important part of the American economy, but their role in the logistics necessary to trade and industry at large can be invisible to a lot of people. What’s not invisible, though, is the sheer number of large trucks on the road, from flatbeds to traditional semi-trailers, box trucks, and custom carriers for livestock and heavy machinery.

With the number of drivers carrying goods for stores, factories, and even supply line shipments for hospitals and other core services, it’s no surprise that about 500,000 crashes each year involve commercial trucks of one kind or another. Luckily, the number of deaths from these trucking accidents is down a long way from the years before 2008. In 2018, just 4,136 people died in accidents with a large truck, and rising concern with seat belt safety is a big part of that. If you drive truck for a living, you need to buckle up to help reduce your chances of injury.

The good news is that seat belt use is and has been on the rise for some time. According to the Centers for Disease Control and Prevention, seat belt use rose 11% between 1981 and 2010. Even better news is that since 2010, those numbers have continued to rise, reaching 90.7% in 2019.

Those numbers also show that regardless of the number of accidents over the years, about half of all fatalities involve people who are not wearing seat belts. In 2009, drivers and passengers who skipped the seat belt made up 53% of all accident deaths. In 2017, that number was still 47%, and studies have shown the safety benefits for truck drivers are even greater than for drivers in passenger vehicles.

Another important point is how seat belt enforcement helps efforts to increase passenger safety. While it can be inconvenient to be stopped for a safety check, states that have rigorous enforcement programs have a 9% higher rate of seat belt use than those without them, and the national rate of 90.7% represents the average across both high enforcement and low enforcement states. That means if you are driving in a state that’s less rigorous about its enforcement, you’re more likely to be surrounded by at-risk drivers and passengers.

While seat belt safety has been growing as a public concern, it’s important to realize that it’s not the only safety measure that is important. The number of deaths due to accident that involve large trucks is generally down since 1981, but it is not linear. From 2009-2015, the number of deaths was down significantly compared to those in the years since, although both sets of numbers are well below the average for most years from 1991-2008. That mirrors the rise and fall of the national accident rate.

What is important to note is that while the number of fatal accidents was lower in those years, the likelihood of fatality among unrestrained drivers was higher.

So, what caused the decrease in fatalities among unrestrained drivers? No doubt some credit belongs to the innovations in safety technology since then, but it’s also worth noting that the increase in safety belt use can be credited with a lot of the reduction. The more people wear them, the less likely it is that the total number of fatalities connected to a lack of use will remain high. 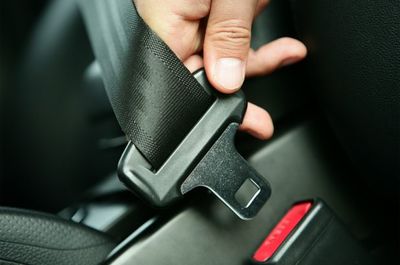 WHAT CAN TRUCK DRIVERS DO?

The best way to help increase everyone’s safety on the road is to set a great example. When you buckle up, you not only serve as a role model for less experienced driving professionals, you also serve as one to the kids and young adults in passenger vehicles who literally look up to you as they pass you on the highway.

Of the more than 4,000 fatalities involving large trucks each year for the past half-decade, between 550 and 700 deaths are those of the large truck drivers. You can help reduce that number while setting a good example.

Safe drivers are also in greater demand throughout the workforce as trucking companies continue to grapple with a shortage of drivers across the country. If you are a truck driver with an excellent safety record, there may be a better trucking job available to you.