We were shocked to find out that while some drivers over-eat regularly, the majority do not – including most overweight and obese drivers. In fact, most drivers have a calorie deficit compared to their resting metabolic rate. Yet many drivers, despite eating fewer calories, continue to gain weight and worsen health risk markers such as blood pressure, cholesterol, and blood glucose.

Healthy weight loss is more complicated than calories in vs. calories out. Aside from the facts that proteins, carbohydrates and fats all have different thermal effects, requiring different energy to break them down, and that processed foods often have a significantly lower thermal effect than the same meal as a whole food, there are two main reasons drivers struggle with health and weight:

First: Long-term caloric deficits (dieting) cause our metabolism to slow down and the body to store more fat. While most people experience initial weight loss when reducing calories, if it is continued over time, the body soon will plateau and begin storing additional fat.

Second: The hormone response to foods can impact health and weight more than any other factor. In particular, I’m talking about the insulin response to consuming too many carbohydrates, especially starchy carbohydrates, or too many foods high in sugars. Over time, continuous spikes of insulin lead to insulin resistance and eventually metabolic syndrome, which consists of weight gain and obesity, elevated cholesterol, and hypertension.

As we see drivers eating just once or twice per day, while eating the wrong types of foods, it is easy to see the problem. A driver who consumes just 1,500 calories, but lives off of coffee and caffeinated soda or energy drinks, snacks on sugary treats, then finishes the day by eating a large 1,000-calorie meal of pasta, fries, bread, and a little dessert, has a slower metabolism and produces far more insulin than a driver who consumes 2,200 calories made up of four separate 550-calorie meals/snacks that are filled with healthy fats, lean protein, and modest amounts of carbohydrates.

If the calories in vs. calories out theory was correct, the first driver should be losing weight due to a calorie deficit, and driver two should probably gain a little weight with a calorie surplus. But in reality, driver one puts on 15 to 40 pounds each year, while driver two maintains his or her weight or loses a few pounds each year. 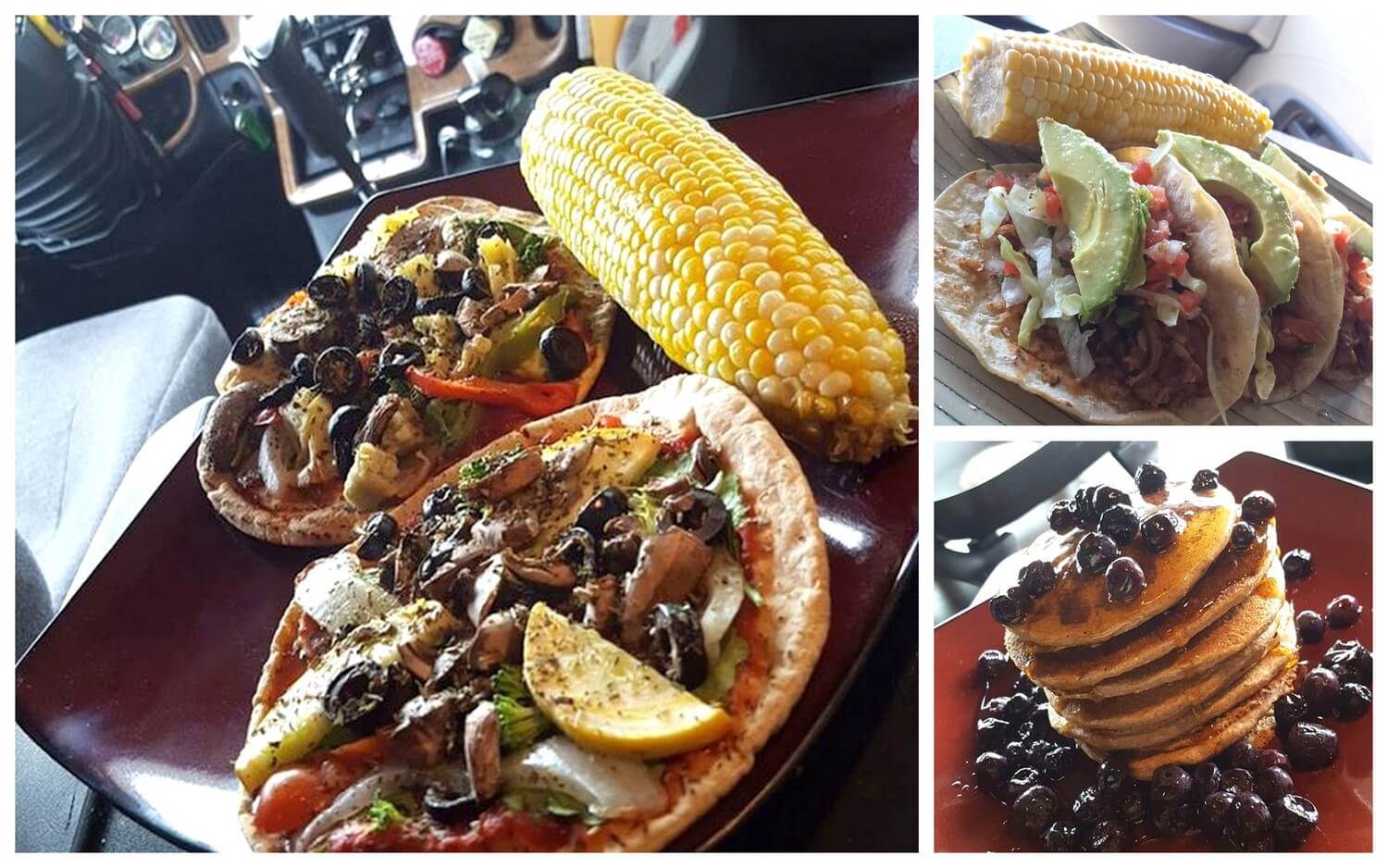 Eat three to four times each day – two meals and two snacks, or two meals and one snack. This helps keep the metabolism active and helps regulate blood sugars (minimizing insulin). Drivers can prep meals and snacks for several days in advance that are easy to make and ready to eat. Meals such as rice and beans, or microwavable meals without preservatives, are great. Snacks such as celery or apples with peanut butter, or a cup of mixed nuts, or fresh carrots are also great options.

Minimize refined carbohydrates from breads, pasta, cookies, and sweet drinks (even diet drinks), and avoid starchy foods like potatoes and white rice. Instead, carbohydrates should come from vegetables, legumes and whole grains. Refined carbohydrates have little to no fiber and turn into sugars in the blood stream quickly, causing spikes in insulin.

Eat fully plant-based at least four days per week. Drivers can ease into it by starting with one to two days, but it’s easier than most people think. We’ve had hundreds of drivers do this, and every one of them feels better than ever. Eating a plant-based diet has been shown to lower inflammation, cholesterol, blood pressure, and blood glucose. A simple plant-based day could consist of a bowl of real oatmeal for breakfast; soup or a veggie wrap for lunch; fresh veggies and a handful of nuts for snacks; and three-bean chili for dinner.

Avoid high-animal-protein, low-carb diets such as the Atkins Diet and Paleo diet. While there is initial rapid weight loss, too much animal protein causes a variety of complications, including inflammation and oxidative stress (even gout), and is connected to higher mortality rates, meaning more illness and death.

Truck drivers who follow these tips can improve their diets, their health, and their energy.