According to Dr. John McElligott, co-founder of St. Christopher Truckers Relief Fund and volunteer medical advisor to the fund, the biggest problem in trucking is health.

“Women in trucking and women in business is a big deal these days – without women, we would not make it through the day,” McElligott explained. “Women still outlive men. How can that be, you may ask? Men – the older they get, the more they continue to work. Women end up having to stop working in order to take care of the man. Men are known to go until their 50s and 60s without ever seeing a doctor. It’s not like that with women. But in trucking, women don’t have as much access to healthcare with their lives on the road.” 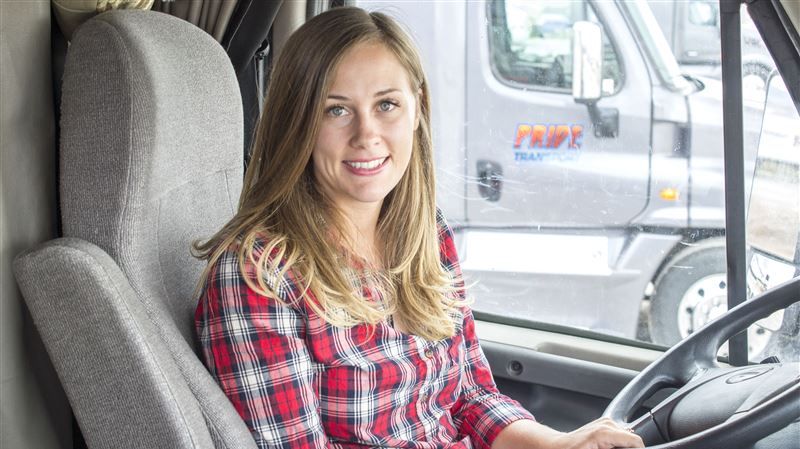 “The best pump you’ll ever own is your heart,” McElligott stated.

According to McElligott, studies show that one in four die from heart disease. Women who exercise at least 30 minutes a day can lower the risk of dying early by 27%. In-cab exercises could include free weights or even a mini trampoline, advised the winner of Rolling Strong and Women In Trucking’ Accelerate Your Health Wellness Competition.

When asked how women can safely treat migraines while on the road, McElligott explained that migraines have “auras” – symptoms that arise before it becomes a full-blown migraine – that are caused by specific triggers. By seeing a doctor, truck drivers can help identify what’s causing the migraine and safely figure out a plan to treat them to eliminate them entirely.

“Obesity is like being in a torture chamber; it’s very intense,” McElligott said. “Some recent studies say 50% of truckers are obese, but that’s not what we’re seeing in our health clinics. In fact, we’re seeing more patients suffering from obesity.”

According to Echosens, the FibroScan non-invasive, rapid and painless examination to accurately assess liver health is expected to become a key success factor for mitigating the risk and halting the progression of fatty liver disease, fibrosis or liver cirrhosis among drivers. These conditions are inextricably linked to metabolic syndrome and obesity and may result from long hours behind the wheel with limited opportunities for physical activity, healthy food and regular shift and sleep patterns.

“Even modest lifestyle changes – including diet and exercise – can have a big impact, with even 3% to 5% weight loss documented to improve liver health,” said John Gingrich, CEO of Echosens North America. “FibroScan is easily implemented and provides a valuable tool for early detection, monitoring, patient education and engagement.”

Women are five to eight times more likely than men to have thyroid problems – which has a strong hand in obesity. “Obesity is easy to treat, but if left untreated, it can lead to other health concerns including heart disease ,” McElligott said.

Joint issues are also a common symptom of obesity, specifically in the knees and especially in truck drivers. Ten million women suffer from knee pain, also due to wider pelvic bones and estrogen.

“You have no idea how many drivers I’ve seen jump out of their cabs, putting immense strain on those joints,” McElligott explained. “Don’t jump out of your cab. Three-point exits out of the cab are recommended to help sustain the health of your joints.”

According to McElligott, one in eight women develop invasive breast cancer, while 12 million women are diagnosed with cervical cancer each year.

By knowing your family history and getting regular mammograms after the age of 40 – earlier if strong family history – women can stay on top of their health.

As almost all cervical cancers are caused by HPV, or human papillomavirus, McElligott recommends women truck drivers get annual pelvic exams and PAP smears because early detection is key for both breast and cervical cancer. Both are highly treatable when caught early.

Polycystic Ovary Syndrome (PCOS) is a condition that affects a woman’s hormone levels and is known to cause ovarian cysts, obesity, and acne. Because of the hormonal imbalances, PCOS is known to have depression connections, McElligott explained.

“It’s important to see a doctor,” he said. “Men are known to not go to a doctor until they have a problem that might be too late to fix, that’s why seeing a doctor is so important. For example, a driver suffering from PCOS came to see us at St. Christopher and we helped her conceive a child.”

McElligot added that life is changing. More and more women are taking the reins, so take the reins over your health, he said.

“Lung disease is on the rise for women,” McElligott said.

Why is that? “The answer is simple, McElligott stated. “Smoking is one of the leading causes of respiratory diseases.”

Research shows that at least 47% of women are affected by respiratory diseases such as asthma, emphysema, hay fever, chronic bronchitis, and more.

McElligott had a simple solution – stop smoking. St. Christopher has an incentive program called Rigs without Cigs, encouraging truck drivers to stop smoking in steps and ending with monetary rewards.

While these five are the top five health concern for women, there are others that are still facing the general public as well as truck drivers:

“St. Christopher has taken diabetes support to the moon,” McElligott said. “We have a diabetic support program within St. Christopher called Driving Down Diabetes, a CDC approved diabetes prevention program.”

The yearlong program, which opened for participants on Feb. 1, focuses on nutrition, exercise, stress management, and more.

While access to insulin is mostly insurance-based, it is available to truck drivers who need it. The U.S. Department of Transportation requires proper documentation that can prove the patient is responsible in properly logging sugar levels, so that the Centers for Disease Control and Prevention sees that the patient is in true need of insulin assistance.

Healthcare access on the road with the help of St. Christopher

Many truck drivers are uninsured and have difficulty accessing healthcare in a traditional care setting. There are more than 9,000 walk-in clinics in the U.S. with stretch and flex programs to stay flexible with a truck driver’s schedule and lifestyle. There are telemedicine opportunities, which grew in popularity due to the COVID-19 pandemic. There are also supplemental insurances to help truckers pay for medical bills as well as vaccines to stay on top of their overall health.

“If drivers don’t have health insurance, St. Christopher will help connect the driver with the right insurance provider,” McElligott added. “Teaching institutions are even known to provide grants to drivers in need of treatments, and surgeries including emergent surgery. So there are always options.”

“We learn something new every day about COVID-19,” McElligott said. “One of the things I’ve found is patients who go into the hospital, urgent cares, ERs, and who end up dying tend to have low Vitamin D levels and suffer from obesity.”

McElligott urged drivers to get the vaccine as soon as it’s made available to them.

“It’s almost impossible for truck drivers to get the second vaccine shot at the same location, which makes Johnson and Johnson’s one-shot vaccine more attractive to drivers,” he added. “This is not a seasonal disease like the flu; it is year-round. As it grows, there will be new vaccines to battle the new strains. Some doctors say don’t get the vaccine, but if you have risk factors, especially respiratory disease, you really should get the vaccine.”

Mental health didn’t make it on the top five list, but the pandemic has reminded those that mental health is not something to ignore. McElligott recommends women exercise daily, maintain healthy weight, stop smoking, laugh, meditate, and breathe.