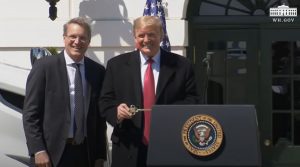 The trucking industry will play a critical role in the development and implementation of plans to restart the country’s struggling economy, American Trucking Associations President Chris Spear said.

In an interview with Transport Topics Radio on SiriusXM, Spear discussed how the industry will contribute to a White House commission tasked with advising government officials about critical next steps as the nation works through recovery from the effects of COVID-19.

“On the transportation grouping, trucking is well represented,” said Spear, who is a member of the panel. “It’s got a number of carrier CEOs … that have a lot of presence around the country, and understand the economy from that perspective — not just as a national, but a regional, state and local level.”

Economists are broadly saying that the country in now in a recession, with new unemployment claims reaching 22 million in three weeks. ATA Chief Economist Bob Costello has forecast that gross domestic product could fall on an annual basis by 20% in the second quarter of the year.

Spear notes that reopening and returning the U.S. economy to health will take time, and will be done in stages.

“It’s really an opportunity to help shape what this is going to look and feel like. Not just now, as we come out of the crisis, but how long that bridge needs to be from here to the recovery and how we do it safely,” Spear said during the interview, which is set to debut April 25 at 1 p.m. ET on SiriusXM Channel 146. “It’s already started. It started last week with the initial guidance that came out. There was a lot of talk last week on our first call with the president about testing, a lot of talk about staggering it. So, low-risk states and regions first and ending with the highest-risk states and regions last. And logistics is going to be a very important part of that, because we are essentially the glue that pastes all those groups together.”

Spear suggested the entire process could take two to three months, but he believes the representation from the trucking industry will help propel the program forward.

“These are all people that will come to these calls not just identifying problems, but proposing concrete solutions and also putting a lot of resources towards getting these solutions done,” he said

The trucking industry has received a healthy dose of credit for getting things done amid the COVID-19 pandemic — in particular, keeping goods on the nation’s grocery store shelves and carrying much-needed medical supplies to hospitals, clinics and doctors’ offices. On April 16, the White House recognized the trucking industry with an event attended by Spear and several truck drivers.

“The reason why the president wanted to host that is just to say ‘thank you,’” he said. “I think it played very well. It wasn’t politicized. It was just centered on those drivers. That’s what we were hoping for, and that’s exactly what we got. It was a nice shoutout to them, well-earned.”

Still, Spear noted there remain important issues that he and his legislative affairs team are working on to make sure fleets and drivers can do their jobs.

“We’ve worked at the state level with the governors, especially in high-risk states to shape policies that are not adverse to interstate commerce,” he said. “We need public rest stops open. We need the parking, the ability to rest, use the restroom, working with our private truck stops to ensure their position, and making available food. There are going to be bumps and bruises along the way. This is not easy. As roadblocks get thrown up in front of us, it’s our job to knock them down.”