Why women are critical to the future of trucking

A shortage of drivers continues to be one of the greatest challenges facing the trucking industry today. Based on a 2019 report by the American Trucking Associations (ATA), the industry was short roughly 60,000 drivers in 2018, up nearly 20% from the prior-year estimate of just over 50,000. The ATA warns that if current trends hold, the shortage could swell to over 160,000 by 2028.

To stem the shortage and accommodate industry growth, the trucking industry will need to hire roughly 1.1 million new drivers over the next decade — an average of nearly 110,000 per year.

According to the ATA, the need to replace retiring truck drivers will account for over half of new driver hires (54%). The second largest factor will be industry growth, accounting for 25% of new driver hires. In order to meet the growing demand for drivers, the industry acknowledges the need to recruit more women drivers. Women drivers make up only about 7% of the industry’s driving population today.

In 2016, the Women In Trucking Association (WIT), partnered with the National Transportation Institute (NTI) to create the WIT Index. The purpose of the index is to better quantify the number of women truck drivers and management team members in the trucking industry on a national level.

Findings based on the 2018 WIT Index revealed only marginal increases in the percentage of female drivers (from 7.13% in 2016, to 7.89% in 2017), and women in management, which increased from 23% in 2016, to 23.75% percent in 2017. However, among companies reporting data, more than a quarter of the carriers confirmed a 28.7% increase in female drivers. In addition, fleet companies reported 19% growth in women drivers in 2017, which WIT views as a healthy trend, indicating that more fleets are serious about understanding the gender divide, which could pave the way for creating initiatives to improve the gender ratio.

“The gradual increase in women drivers aligns with what we’re seeing among our customers, as well,” said Lindsey Grammel, vice president of global brand development for TrüNorth Global.

“In addition to seeing more women entering the field, we’re also seeing more couples. Many of them are older, with grown children, and have retired from careers outside of the industry. Working as a driver team allows them to not only spend time together, but enjoy traveling to parts of the country they may not have visited before. Having a partner along for the ride can also provide women drivers with an added sense of security on the road, especially when stopping overnight.” 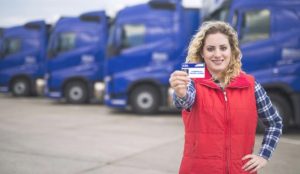 Challenges and opportunities for women in trucking

Trucking can pose both opportunities and hurdles for women entering what has traditionally been a male-dominated field. In a Trucks.com blog post, WIT president Ellen Voie wrote that some of these hurdles are created by the industry and others by the regulatory environment. Voie pointed out that truck cabs, for example, are generally built to fit the larger physical size of a man. “Their smaller and shorter stature make it harder for women to reach the controls and get the seats adjusted into a comfortable position while keeping their feet on the pedals,” she noted. “When you are driving days at a time — except for the rest breaks — you have to be comfortable.”

Yet rest options, which are often limited to parking lots or trucking rest stops, do not always provide the safest environment for women drivers. “Safety should always be a top concern for women drivers,” Grammel said. “One of the ways we’ve contributed to driver safety — for both our male and female customers — is through the development of our mobile claims app, with built-in GPS location technology. That enables drivers who experience a breakdown to quickly locate the nearest licensed repair shop directly from their smart phone, tablet or other devices, and arrange for a tow, if needed. Our goal is to help them get to a repair facility or other safe environment as quickly as possible.”

Long hours and being away from family for days or weeks at a time can also discourage many women from joining the field as long-haul drivers, while others enjoy the freedom to work independently and welcome the adventure of the open road. One upside that all women drivers embrace is the opportunity to receive equal pay for their work.

“Women and men are paid the same as drivers,” Voie told CNBC.com. “A carrier sets the pay based on mileage, hours or percentage of the load. It is not related to age, ethnicity or gender.”

A career in trucking

Within the trucking industry, women make up 47% of the workforce. That includes 7% of drivers and 23% of all management roles. “Ten years ago, when I traveled to industry conferences and events, it wasn’t unusual to be the only woman in the room, or one of a handful of women,” Grammel stated. “The landscape has changed considerably in recent years with more women filling traditionally male-dominated roles in sales, logistics and senior management. I feel fortunate to be part of a team that has always welcomed and encouraged women’s’ contributions to the industry, across job categories and at every level of the firm.”

Since 2007, the nonprofit WIT, has played a role in advocating for women drivers, as well as women in logistics, management and other roles throughout the industry. WIT’s mission is to “encourage the employment of women in the trucking industry, promote their accomplishments, and minimize obstacles faced by women working in the industry.”