New EPA rule would crack down on truck emissions

The Trump administration announced Monday the development of a proposal to tighten pollution control standards on trucks, per an EPA press release.

This is in sharp contrast to other Trump administration environmental policies, which have aimed to roll back previous rules. Although the proposal aims to reduce airborne pollution, it is being met with skepticism from industry experts.

The anticipated proposal would limit emissions of nitrogen dioxide, which is linked to respiratory infections and diseases. 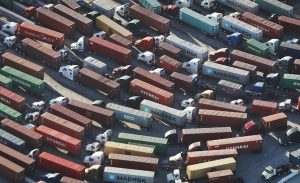 While the proposal could stand out as a more ambitious attempt from an administration that has been admonished for rolling back a number of environmental laws, environmental groups worry it could block state laws on trucking emissions that may be more stringent.

The current EPA guideline for cutting emissions, which was last revisited in 2001, saw a 40 percent drop in the national nitrogen dioxide emitted by heavy-duty trucks. It required nitrogen emissions to be cut by 95 percent over 10 years, according to the New York Times.

This policy is in sync with the EPA’s Cleaner Trucks Initiative (CTI), which was launched in November 2018. As the name implies, the CTI aims at reducing nitrogen dioxide emissions from heavy-duty vehicles.

Nitrogen dioxide has a vastly negative impact on both human and environmental health. The EPA states that increased nitrogen dioxide levels can cause acid rain, nutrient pollution in coastal waters, and decreased air visibility.

In a press statement, Andrew Wheeler, the EPA administrator, stated that “A strong and resilient trucking industry is imperative to maintaining a strong and resilient economy. Through this initiative, we will modernize heavy-duty truck engines, improving their efficiency and reducing their emissions, which will lead to a healthier environment.”

Other officials, however, are skeptical of the proposed standards. Speaking with the Washington Post, Margo Oge, the former director of the EPA Office of Transportation and Air Quality from 1994 to 2012 said that she is “suspicious” that the agency is trying to placate the trucking industry by proposing weaker emissions restrictions.

In the same press release authorized by the EPA, the American Trucking Association (ATA) Executive Vice President of Advocacy Bill Sullivan stated that “ATA is committed to continuing to work closely with EPA on developing the next generation of low-NOx emitting trucks through the Cleaner Trucks Initiative.”

The EPA plans on publishing a proposed rule in the coming months of 2020 and will be taking feedback from “state and industry partners.”