Every year, we marvel at Santa Claus’ extraordinary feat of delivering toys to boys and girls all over the world. While it’s impossible for any mortal to match what Santa accomplishes in a single night, he does have down-to-earth counterparts in freight terminals and truck stops across the nation: truckers. 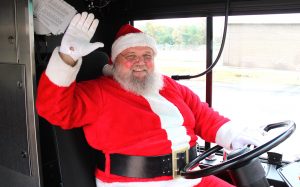 Think about it. Over the course of a year, truckers probably move about as much freight as Santa does and often in tougher conditions. After all, Santa doesn’t have to contend with heavy traffic, road construction, tolls or inspections. Both truckers and Santa leave behind their homes and families to get the job done.

Santa and truckers both have to meet impossibly tight delivery deadlines and follow complicated routes. While both deliver toys and coal, truckers also haul everything from auto parts to zucchini. Santa doesn’t get paid, and truckers don’t get paid enough.

Both have big hearts and a soft spot for children. Both have a mystique about them and appear larger than life. Most importantly, truck drivers, like Santa Claus, are absolutely necessary for the holidays.