The event, which drew 2,764 attendees to the San Diego Convention Center, spotlighted — among other key issues — pending changes to the Federal Motor Carrier Safety Administration’s hours-of-service regulations for truck drivers. ATA, for one, is a proponent of increased flexibility with those rules and is working to craft public comments on the proposal that will be backed with sound data, said ATA President Chris Spear. 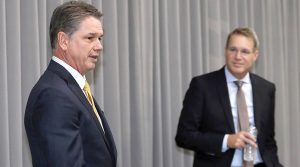 “What we submit will be laced with a lot of justification, as we always do,” he said during the federation’s closing press conference at the event.

The HOS rules ranked second to the driver shortage on the annual list of top industry issues compiled by the American Transportation Research Institute, with driver compensation coming in third.

Other major topics of conversation at MCE included international trade and infrastructure. Spear said ATA will continue to press Congress to pass the pending U.S., Mexico, Canada Agreement and will keep pushing lawmakers to take action on highway infrastructure improvements.

In his Oct. 7 keynote address, Spear vowed to fight back against trial lawyers that have been targeting trucking companies and securing increasingly steep jury awards — even in cases where the truck driver was not at fault in a crash.

“I’m excited that we’ve moved tort reform up to the highest level of priorities here at ATA,” said Guillot, who is president of Louisiana-based Triple G Express Inc. “I think we’ll see a lot of activity with that topic this year.”

At the same time, the legalization of recreational marijuana in a growing number of states threatens to exacerbate the trucking industry’s existing workforce challenges.

To address this emerging issue, ATA endorsed a new set of policies and recommendations aimed at preventing impaired driving.

ATA said it supports maintaining employers’ rights to test for marijuana and called for more research on its effects and the development of testing methods and impairment standards.

The exhibit floor at MCE. This year’s conference featured 175 exhibitors, including 44 that were making their first appearance at the show. (John Sommers II for Transport Topics)

Another rising topic that garnered significant attention at MCE was cybersecurity. Transportation companies have become a top target for ransomware attacks, industry experts said at an educational session at the conference.

Motor carriers that continue to use grandfathered e-log systems classified as automatic onboard recording devices, or AOBRDs, have until Dec. 16 to update those devices to compliant ELDs.

Other sessions explored the potential for artificial intelligence, automation and augmented reality in the industry.

Some of that technology was on display in the MCE exhibit hall, where truck manufacturers, suppliers and technology vendors showcased their latest products. This year’s conference featured 175 exhibitors, including 44 that were making their first appearance at the show. 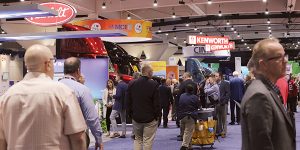